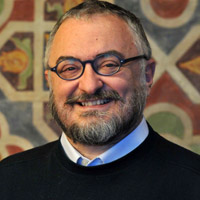 orcid.org/0000-0002-6602-5871 Full professor of General Linguistics and Vice Rector of the Institute for Advanced Study IUSS he founded and directed NEtS; he was also Head of the Department of Cognitive, Social and Behavioural Sciences and Coordinator of the Ph.D. Program in Cognitive Neuroscience and Philosophy of Mind.

He has been director of the interfaculty program in cognitive neuroscience at the Vita-Salute San Raffaele University in Milan which he contributed to found in 1996 and associate professor at the University of Bologna. Ph. D. in Linguistics at the university of Padua, he has been Fulbright student and visiting scientist at MIT and at Harvard University several times; he obtained a "Diplňme d’čtudes supčrieures en thčorie de la syntaxe et syntaxe comparative" at the University of Geneva.

His main fields of research are theoretical syntax and the neurobiological foundations of human language. Among his contributions are the discovery of inverse copular sentences, the principle of Dynamic Antisymmetry, the neurobiological correlation of "possible" vs. "impossible languages", the effect of negation on premotor cortex activity and the electrophysiological representation of inner speech. Among his books: The Raising of Predicates (Cambridge University Press, 1997), Dynamic Antisymmetry (MIT Press, 2000), The Boundaries of Babel (MIT Press, 2015 II edition), Breve storia del verbo "essere" (Adelphi, 2010), I speak therefore I am (Columbia University Press, 2016) and The Equilibrium of Human Syntax (Routledge, 2013); he also published several papers on international journals including Nature Neuroscience, the Proceedings of the National Academy of Science, Trends in Cognitive Science, Linguistic Inquiry and Neuroimage. He is member of the Pontifical Academy of Letters and arts and the Science and Faith Foundation at the Vatican City, member of the Academia Europaea (London) and CEPR. His first novel, "Il segreto di Pietramala" (La Nave di Teseo, 2018), was awarded the "Flaiano" International Literary award in 2018.
Google Scholar Citation Index For a list of publications an extended biography see

orcid.org/0000-0002-6602-5871 Tweets by @andreamoro_ Opinions on twitter are my own and do not reflect any position of the School. Conferenze e lezioni su youtube classes