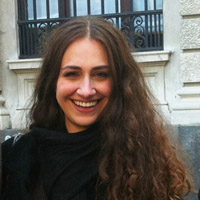 Valentina Bambini is Associate Professor of Linguistics at the Institute for Advanced Study (IUSS) of Pavia, Staff Member of the IUSS Center for Neurocognition, Epistemology and theoretical Syntax (NEtS), Coordinator of the joint IUSS-San Raffaele University PhD Program in Cognitive Neuroscience and Philosophy of Mind, and Adjunct Professor of Neurolinguistics at Scuola Normale Superiore in Pisa.

She received her undergraduate training in Linguistics at Scuola Normale Superiore and University of Pisa. She earned her PhD in Linguistics at Scuola Normale Superiore (2007), with a dissertation investigating the neural basis of metaphor comprehension. She worked as postdoctoral fellow (2008-2010) and junior researcher (2010-2011) at the Laboratorio di Linguistica of the Scuola Normale Superiore, and then as senior researcher at IUSS, Pavia (2012-2014). She also taught pragmatics and neurolinguistics at Università Vita-Salute San Raffaele in Milano, University of Pisa, University of Verona, University of Zurich. Her main research interests lie in neurolinguistics and in the emerging fields of neuropragmatics and experimental pragmatics, focusing on the cognitive and neural underpinnings of communicative abilities, both in healthy and pathological conditions. She co-coordinated two projects promoted by the EURO-XPRAG network on the elaboration of figurative meaning (2009-2011). She was awarded a grant from Regione Toscana (2010-2013) to develop new tools for the assessment of communicative impairments in clinical populations. The project led to the creation of the APACS test (Assessment of Pragmatic Abilities and Cognitive Substrates). Currently she is the national coordinator of a PRIN project funded by the Italian Ministry of Education, University and Research (2017-2020), addressing the relationship between pragmatics and Theory of Mind and the development of training programs to promote communicative abilities across the lifespan and in patients. She authored more than 40 publications on books and international journals, including Brain and Language, Italian Journal of Linguistics, Neuropsychologia, Current Opionion in Neurobiology.
Selected publications
Books Papers