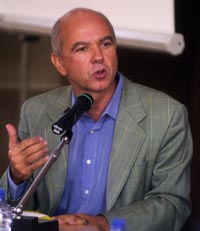 Michele Di Francesco (Diano Marina, 1956) is full professor of Logic and Philosophy of Science and Director ("Rettore") of the Institute for Advanced Study IUSS Pavia, and former Dean of the Faculty of Philosophy the Vita-Salute San Raffaele University in Milan which he contributed to found in 2002. He is member of the Research Centre for Experimental and Applied Epistemology (CRESA) at the San Raffaele University in Milan, and Membre Associé of the Institut Jean-Nicod (CNRS, EHESS, ENS), in Paris.
He studied at the State University of Milan ("Laurea" and Ph.D. in Philosophy) and Geneva ("Certificat de spécialisation"). Member of Wolfson College and Academic Visitor of the Subfaculty of Philosophy at Oxford University (1988), he was invited researcher at the Department of Philosophy of the University of Geneva (1990-1992), and Associate Professor at the Universities of Palermo (1992/93) and Eastern Piedmont (1993-2003). He is a Past President of the European Society for Analytic Philosophy and of the Italian Society for Analytic Philosophy, a co-founder and former director of CRESA at the San Raffaele University, where he directed the Doctorate in Philosophy and Cognitive science, and the Doctoral School in Philosophy and science of the mind. Since 1993 he is a contributor of the cultural supplement of the Italian Newspaper «Il Sole 24 Ore». He is the author of about ten books and one hundred scientific articles; he edited various books and conference proceedings. His most recent book is La mente estesa. Dove finisce la mente e comincia il resto del mondo? (with Giulia Piredda, Milan 2012).
His main field of research is the philosophy of mind and of cognitive science, and in particular the philosophical problems of subjective experience, mental causation, and emergentism, the extended-mind model of cognition, and the philosophical basis of cognitive neuroscience.